A World Not Ours, May we not forget…

When I say : Palestinian, what do you think ? I’d say that, according to the common psyche, you picture a young man running for his life amongst the debris of the shattered houses. You imagine the sky raining bombs, a boy standing up to a tank with a little stone in his hand . What if I say Palestinian refugee ? Your mind would go: tents, barbed wire and starvation. There, you have « cliched » them, you made them into a picture, an irreality. You distanced yourself from them and made them inhuman. You shuddered a little bit, mourned for a second that surreal Arab/Muslim giant army that would have come from the abysses of the profound Arabia, it’s stallions running at full throttle and raising the desert’s sands up to the sky,  and would have rescued Palestine from the claws of the Israeli occupier. You’d then have blamed it on the cowardly world leaders, then forgot about it.

A World Not Ours, the documentary film by Mahdi Fleifel, a Londonian writer and film director with Palestinian origins, demolishes this infamous modern kitsch, by showing real footage of real people through their daily lives in Ain el Helweh, a Palestinian refugee camp in the outskirts of Lebanon. It’s a tragedy, but of a different kind. You see a Palestinian cursing against Palestine, an ex-war hero gone mad by idleness, and an old man unwilling to leave the refugee camp, a  land that is essentiallly not his. It raises questions about identity, patriotism, what is it ? What is belonging ? Is it but an illusion ? Is it this sacred idea imposed on us from the outside ? Should you have lived in the land to be entitled to that idea ? How much should it have given you for you to consider it a motherland ? How strong is the love of this idea ? Can it resist time, poverty, joblessness…? Not always, apparently, and I promptly suggest you get off your high horses before you start judging. « Elli gual del aasida barda, ydir yeddou fiha », Nas el Ghiwane said. Get the palestinians out of the box you put them in, rehumanize them, and maybe you’ll understand.

David Ben-Gurion, Israel’s first prime minister once said : » The old will die and the young will forget« . You couldn’t find a more accurate description of A World Not Ours . Trapped in Ain El Helweh, with all the energy of the world but nowhere to spend it, the young struggle to replenish a life that exile and lebanese law-enforced job scarcity devoided of meaning and joy. The old cling to this land on loan (literally*), as if leaving it for better horizons meant relinquishing their right to return to a Palestine that may never be theirs again. Yes, it may never. With nothing but UN resolutions, inane condemnations, and formality summits, they’re doomed.

Mahdi’s friend, Abou Eyad, the Fath militant who yet was scarcely seen with a gun throughout the whole film, lives off a meager allowance the faction gives him. Living an idle existence, he lifts his palestianity as a sisyphean rock, a stain spilled on him by the traitorous governors, by Aarafat’s Oslo handshake, by the mischievous proceedings of the corrupt powers in place. The solution : forgetting, the exorcism of pain by drugs, of the neurosis by cigarettes, of the anger by the world football cup that might distillate the longing for a long lost home country. He escaped, but fatality caught him, sent him back to misery. That’s a spoiler, but this is not a fiction, and happy endings rarely exist besides these.

Mahdi’s uncle, Said, is the ex-war hero whose companion’s loss brought to the edge of madness. He who used to terrorize the enemy troops by his strikes with Jamal, the lost idol, is now reselling used soda cans collected off the street. Poor, they say, is the nation that has no heroes …shameful is the one that, having them,forgets them.
Enough said, or else there would be no use for you to go see the movie. A World Not Ours is a true piece of art, it channels huge emotions and causes tears to well up, should this world have left any humanity in us, should we have any empathy for the Palestinian cause. Being the result of 20 years of filming and Mahdi Felifel’s inherited passion for the camera, that he perfected in the National Film and Television School in London, A World Not Ours encountered huge success in all the countries it was screened on. It received acclamations and several awards throughout the world’s film festivals. It’s New-yorkish music soundtrack is Mahdi’s personal fingerprint in the film, rather contrasting with what you’d expect from a war zone movie, but pleasantly soothing nonetheless.

Mahdi Fleifel receiving the Award for Best Film In The International Competition for his film A World Not Ours at Filmhouse.

The title was inspired to Mahdi by Ghassan Kanafani’s book of the same name, A World Not Ours, which also depicts misery, but in different circumstances. It’s a tribute to the people of Palestine and to their struggle. It characterizes their ongoing diaspora and the search for the identity they lost, in a world where hostility starts from your dearest neighbours, where nobody’s willing to lift a finger to help you recover the smalllest shred of land. We’ve had the pleasure to watch it in the ARMCDH’*s event : les Jeudis du Cinéma et des Droits de l’Homme (the Thursdays of cinema and Human Rights) in the 7ème Art movie theater , and it was screened in this year’s  FIDADOC, the documentary festival that took place in Agadir.

Here’s the trailer of A World Not Ours, hoping for you to get the privilege of watching the whole thing, enjoy : 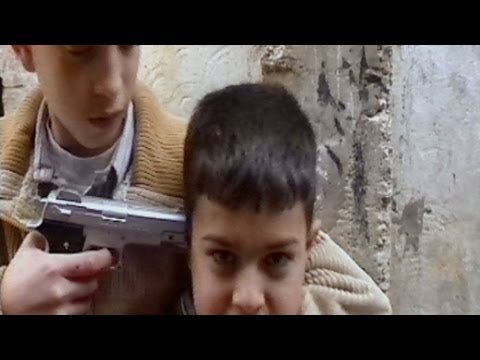 * »Elli gual del aasida barda ydir yeddou fiha »:  literally: He who says this porridge is cold should thrust his hands in it (before judging).